Personal menu
Back to all

Community Natural Foods has some buzzing new employees. That’s right – we’ve got bees! In partnership with Alvéole we are now hosting beehives are each of our store locations. Thousands of bees have been pollinating the urban flora that surrounds us all summer.

And now we've got Honey! Each of our store locations - downtown, Chinook, and Crowfoot - have their own honey in cute little jars. Try them all and see if you can taste the subtle differences. Honey is $10.99 for 140g

Here are some fun facts about bees & why they’re so important to our ecosystem.

• Honeycombs are quite literally the heart of the beehive. Each cell in the honeycomb is built from wax secreted by the bees. These cells are used to store all of the elements that are crucial to the survival of the colony and its development: resources (nectar, honey and pollen) and brood (eggs, larvae and pupae).

MEMBERS OF THE HIVE

• There is only one queen per hive. In ideal conditions, Her Majesty can live for up to five years. She requires a court of bees to help feed, hydrate and clean her, as she is too busy laying up to 2,000 eggs daily to do it herself.

• Male bees within the hive do not have stingers. Instead, they have a reproductive system. Drones do not forage for resources, as their primary role is to mate with a virgin queen from another hive.

• Worker bees may only live between 30 and 45 days, but they occupy a variety of different roles during that time: cleaning, nursing, building, fanning, guarding and foraging.

• Workers dedicate their lives to serving the colony. They will never leave it for another.

• As they get older, worker bees are given increasingly complex tasks. 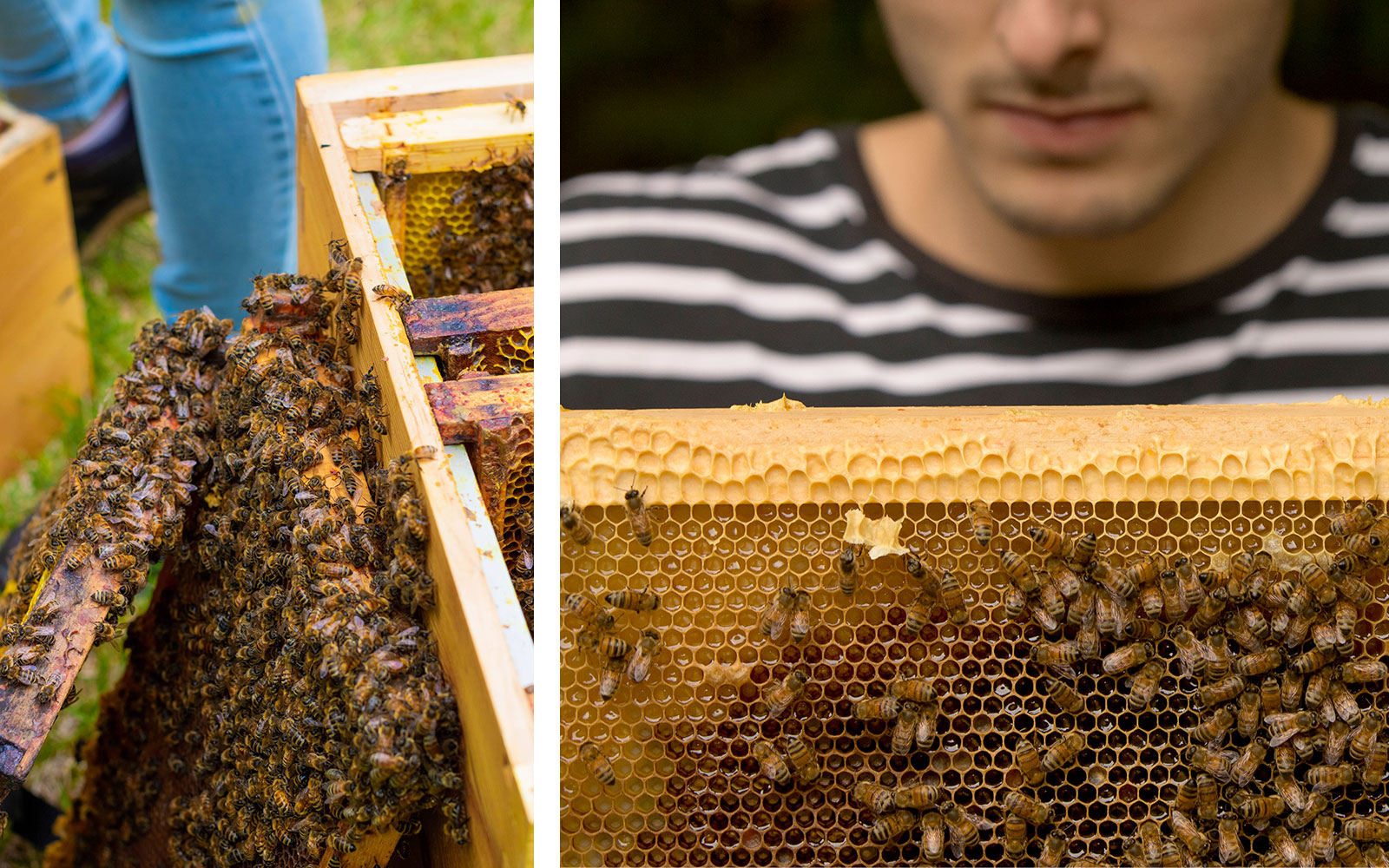 • During the winter, the bees will stay comfortably in the warmth of their hive, where they’ll maintain an internal temperature of up to 35 degrees Celsius. To do so, they form a tight cluster around the queen and keep warm by contracting their thoracic muscles.

• When winter is over, strong hives are divided into several smaller ones - a bit like perennial plants - to distribute the hive’s strength and population size.

• Bees do not eat anything other than nectar and pollen, as opposed to wasps, who feed their young with animal or insect protein.

• Sharing the city with honey bees is simple, easy and natural. After all, they are only one of the numerous species of pollinators, such as friendly butterflies, bumble bees and wild bees, with whom we share our urban area.

• Bee colonies flourish in urban areas. The reason? They require an environment fulfilling three criteria: the absence of pesticides, an abundance of water and floral resources, and a temperate climate.

• Honey bees are not interested in human beings. Their daily quest is to bring nectar, pollen, resin and water back to the colony to ensure its development.

• Bees only resort to stinging when they feel their colony is threatened. This shouldn’t come as a big surprise when you consider that, unlike wasps, bees die shortly after delivering a sting. Their stinger gets stuck and tears off, taking part of their abdomen with it.

• Bees have no motivation to sting unless aggression is demonstrated towards them.

• Italian bees have a very mild temperament. Because of this, they’re perfect neighbours in densely populated urban areas. It’s also why urban beekeepers wear little or no protection.

• Many people who have suffered a painful sting think it was caused by a bee - yet fail to find a stinger in their skin. This means they were more likely stung by a wasp. Wasp stingers, unlike those of bees, are streamlined and can be pushed in or out of their abdomens as they please.

• Bees can see colour, particularly blue, purple and violet. Which is why many of the bee friendly plants are these colours!

• Bees communicate with pheromones, smells that cause a response in other members of the hive.

• It is estimated that bees need to eat 8 kilos of honey to produce a single kilo of beeswax. 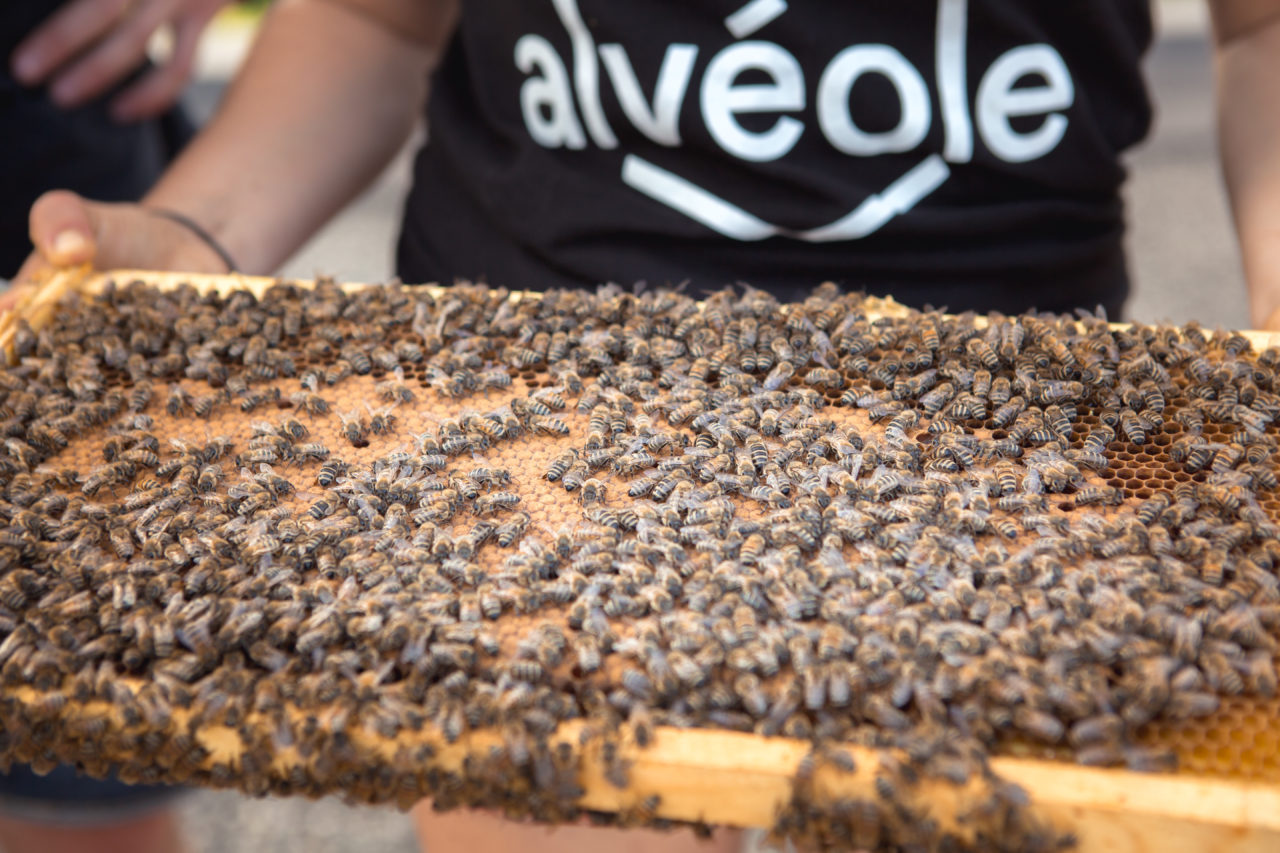 • Since 2013, Alvéole has been installing beehives across North American cities, educating companies, organizations, schools, and families about bees and beekeeping, as well as shedding light on important issues related to industrial agriculture, such as pesticide use, monocultures, and the loss of biodiversity.

• Bees are safe enough for schools: Alvéole has initiated over 100 beekeeping projects in Canadian schools,

• More than 500 companies in North America have installed beehives on their rooftops or land, in partnership with Alvéole.

• Alvéole estimates having reached at least 25,000 people of all ages and backgrounds through its beekeeping services and educational workshops since its inauguration in 2013.

• Close to 96% of corporate clients renew their services with Alvéole every year. 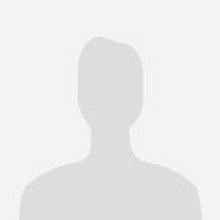 Guest
7/8/2020 10:54 AM
I love bees and I do not spray dandelions and weeds.  Sadly my neighbors and people from the communities close by have made comments about my dandelions.  Please - please educate the public about chemicals!  Most are unware of the consequences of chemicals.  There is no friendly chemicals, they are destroying our food supply.  thank you very much for this amazing information about the most beautiful/wonderful BEES!

Guest
7/8/2020 11:13 AM
This is such a awesome thing to do.  Please help educate the public and the City of Calgary not to spray pesticides on dandelions and not mow the grass as often to save our dandelion for the bees.  When the city mows the grass they don’t pick up plastics and garbage and then it ends up in tiny pieces in our environment.
Also let’s get the City of Calgary on board with planting flowers in our parks.  Lindsay Park doesn’t have any flowers.

Guest
7/8/2020 11:23 AM
Sounds great. Congrats on your efforts.
Will CNF be harvesting, and selling Honey from their hives.

You still haven't told us where the hives are at each store.

Guest
8/19/2020 2:13 PM
Thank you for the fabulous information on bees.  It was especially helpful.  We had a wasp nest  at our condo under the awning in the wooden planter and some people were stung.  Not pleasant.  Take care of our little workers and the Queen.